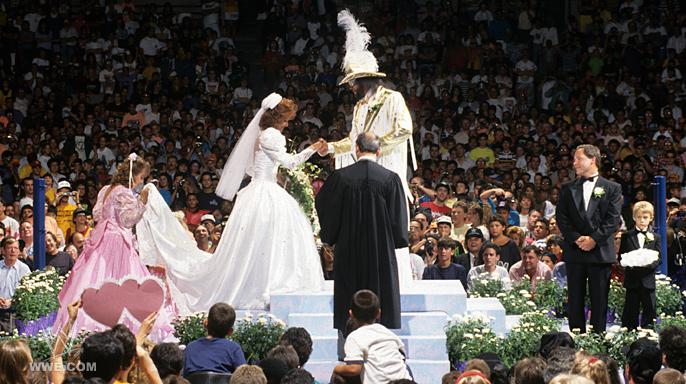 With Valentine’s Day tomorrow what better way to celebrate then to go through some of the most famous weddings in WWE/WWF history. Weddings have always been a good way to kill 10-20 minutes on TV with little to no writing necessary, and while it’s not uncommon for a regular TV wedding to fall apart, wrestling weddings rarely get the chance  to even get through the vows. Now if anyone has an objection to the following post, please stand up. If not, then I proudly bring you some of the best weddings wrestling has to offer.

Uncle Elmer & Joyce
Let’s start with what’s rumored to be the only real wedding in WWE history. This “Saturday Night’s Main Event” hillbilly ceremony had it all. Mean Gene on the organ, Andre the Giant and Hulk Hogan as ushers, an interruption from Roddy Piper, brilliant commentary from Jesse Ventura, and even a foreign object falling on Joyce’s head in the middle of the ceremony (unscripted). The reception, at a barn of course, even had a guest appearance from Tiny Tim. This all gets even better with the rumor that according to Hillbilly Jim, the wedding was real.

Undertaker and Stephanie McMahon Dark Wedding
Not the most romantic ceremony in WWE history but a wedding is a wedding. This was the highpoint of the Undertaker’s “Ministry of Darkness” storyline. Undertaker had kidnapped Stephanie with the intent of forcing her into a dark marriage to please the higher power. This had all types of drama leading up to and during the ceremony, with different wrestlers (individually for some reason) running in to break it up only to be taken out by the Ministry until Steve Austin, in the middle of his Vince McMahon feud, came in to save the day. This of course led to a whole other series of events that I won’t go into here, but damn was it exciting television!

Stephanie McMahon and Test (and Triple H)
Stephanie and Test’s wedding may have been the closest to actually resembling a real wedding. Tuxedoes with sleeves, actual wedding music instead of wrestling music. Even the camera angles made it seem like it could be for real. As a wrestling fan the thing was just awful to watch. Way too long (specifically the duet in the middle of it). The highlight for me is D’Lo Brown walking down the isle as a groomsman, and needing all the will power he had to not strut down the ramp. Triple H however was quick to being us back to reality, as after drugging Stephanie in Vegas he took her to a drive-through chapel where he married her first, ultimately leading to Stephanie turning heel, and more importantly, Stephanie and Triple H starting a real life relationship (actually getting married 3 years later) that resulted in Chyna (Triple H’s then boyfiend) getting fired and McMahon and Helmsley positioning themselves as the real power couple of wrestling.

Billy and Chuck
We can throw realism right out the window on this one. This wedding got a lot of attention since it involved 2 men. This whole sequence is just ridiculous, specifically the duo backing out at the last minute claiming it was all a publicity stunt planned by their manager Rico. Needless to say, the crowd was not pleased. Bonus points however for a fantastic mask applied to Eric Bischoff. The wedding itself was a hot mess, but the ending shows how good a Smackdown vs Raw rivalry can be. If they are going to continue having these inflated rosters, it wouldn’t be a bad idea to revisit the concept.

Randy Savage and Miss Elizabeth
The grandaddy of all wrestling weddings! Although the Macho Man and and Miss Elizabeth were legally married in 1984, their 1991 ceremony set the standard for any wedding storyline that would come after it. I remember as a kid legitimately being happy for them. As far as TV weddings go, the only other one I can remember being this big of a deal was Luke and Laura on General Hospital. It was even the headliner of Summerslam at Madison Square Garden! “Sorry Hogan and Warrior versus Sgt. Slaughter, Colonel Mustafa, and General Adnan. You can’t be the main event. Randy and Elizabeth are getting married!” The odd thing about it is that after 7 years of marriage before this ceremony, Randy and Elizabeth got divorced a year later. Either way this wedding is easily the most memorable in wrestling history, and can also be credited with sparking Savage’s feud with Jake the Snake Roberts, who was mad at Randy for not being invited to his bachelor party. I wish I was making that up but I’m not that clever.