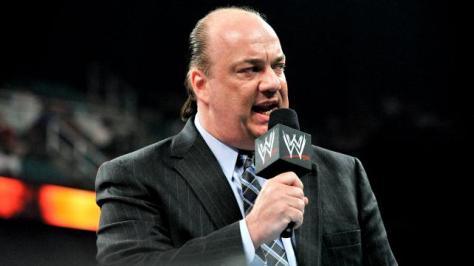 It’s Monday night again, which means that someone you haven’t seen in a while needs to make a special appearance on Raw. This time it wasn’t a wrestler, it was ECW founder and super hype machine Paul Heyman who came back, representing his boy Brock Lesnar. Since Lesnar went off the handle last week and brock his boss’s (Triple H) arm, all the circles speculated that Lesnar would be “fired” for his actions. I assumed that instead Brock would not only remain hired, but would also get his demands met since Triple H was out of commission and John Laurinaitis, who agreed to the demands in the first place, was still around. However Heyman threw us all for a loop when he announced that Lesnar had quit the WWE, due to the way he had been treated by WWE brass and whatever the hell else he was saying. All that matters is Brock quit, and no one can cut a promo quite like Paul Heyman.

Of course Lesnar hasn’t really quit. He’s signed to a lucrative contract that expires after WrestleMania 29. He just “quit” until his next appearance, which are limited based on his deal. Odds are that he will come back at the same time Triple H comes back from his broken arm, so the two can meet. This would most likely be at SummerSlam, and I’ll take a wild guess that after that the only other times you see him in a match are at Survivor Series, Royal Rumble, Elimination Chamber and WrestleMania. This is simply based on the idea that he has a limited number of appearances, and WWE would likely use those for their biggest events and leading up to ‘Mania.

The other piece of news that came out of Raw was the announcement of a Fatal 4-Way match for the World Heavyweight Championship putting current champ Sheamus against Alberto Del Rio (which we knew), Randy Orton (alright) and Chris Jericho (wait, what?). Apparently after losing to Punk twice and failing to secure another rematch last week, Jericho seems to have completely forgotten about Punk and has now moved on to wanting this belt instead. I know I wanted that feud put on hiatus for a while but wasn’t there a better way to do it? Couldn’t he have blamed not winning the beat the clock challenge on someone and then get into a feud with him? Here we just had Jericho thrown into a tag match with Del Rio against Sheamus and Orton, where Sheamus accidentally Brogue-Kicked Orton, paving the way for Jericho to pin Sheamus, leading Jericho to now believe he should be champion. This now makes four straight PPV title shots for Jericho, who has barely won a match since returning. At some point he has to beat someone just to justify him being here. Of course now Orton wants revenge on Sheamus too since “accidents don’t happen in the ring” (just ask The Rockers).

CM Punk got his beef with Laurinaitis going again, ridiculing the GM to the point that Johnny Ace put Punk in a handicap match against Daniel Bryan and Lord “I swear I’m not Prince Albert” Tensai. By Punk’s standards it was a pretty ordinary segment, and the more I think about it, face Punk has been pretty lame the last couple months (outside the ring of course, inside he can still do no wrong). Although I suppose it’s hard to have a good shoot when you’re the WWE Champion that main events PPV’s and is getting everything he wants. Most of the good rants are from disgruntled employees usually on the way out anyway (much like Punk thought he was before MITB).

Naturally Punk lost and Bryan grabbed some more momentum heading into Over the Limit, but the real story to me is the Laurinaitis angle. His feud with Punk had been put aside for Cena, but now that Laurinaitis is set to face Cena in two weeks, the Punk feud is heating up again? He’s also making an enemy out of Sheamus, while Eve (his assistant) is starting things up with Big Show (who beat Cody Rhodes via count out so no IC title and no more rematch clause). Isn’t that a lot of heat from a lot of different directions? I mostly think it’s a sign that there aren’t enough good heels (and the ones they do have get cheered like Jericho and Bryan), and they need someone to keep all these faces on the right side of the crowd. That’s all fine, but it means that we now need to have Laurintis and/or Eve on screen for most of the show since they are involved in everyone’s storylines.

Makes sense for getting Cena cheers and even for Sheamus since Del Rio isn’t exactly bueno on the mic. But do we really need Johnny to promote Punk vs Bryan? Both of them are so good on the mic and get such a good pop from the crowd. They should be able to psych people up on their own. I thought the same of Punk vs Jericho too but that had the whole drinking angle. No accounting for taste I guess. The one thing this does for me however is create the possibility of Laurinaitis or Eve getting involved in any and all matches. Don’t be surprised if we have a mostly heel-driven Over the Limit.

As for the rest of Raw, Beth Phoenix will challenge Layla for the Diva’s Championship at Over the Limit, The Miz came really close to beating Brodus Clay, Dolph Ziggler took out Kofi Kingston (with some aid from Swagger of course), Mason Ryan seems to be coming back, and finally this happened somehow at the Mayweather/Cotto fight: