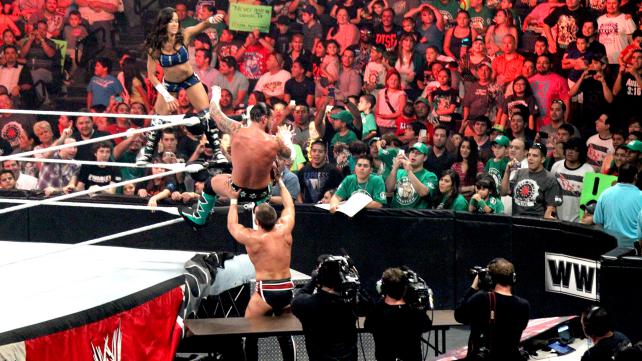 Before this week’s Raw even started I feel like I already knew everything I needed to know. Teddy Long was already announced as this week’s interim GM and announced that Punk and Cena will face Bryan and Jericho (ya know, because Cena/Jericho is a thing again). AJ will interfere somehow I’m sure, because she has been named the referee of the Punk/Bryan match at MITB because apparently she won a fan poll online. I didn’t even know there was a fan poll until today, but if those are the kind of things I miss out on by not visiting WWE.com every day, I can deal. Oh yeah, and Jack Swagger is now getting beat by Tyson Kidd so no MITB match for him (oh how the mighty have fallen). The only reason left to watch it seems would be for Brock Lesnar’s response to Triple H’s second challenge for a match at Summerslam, and that’s only because it means more Paul Heyman talking trash and possibly getting hit again.

John Cena opening the show doing what John Cena does, recapping last week like he was reading last week’s production notes. I guarantee sewage baby will be trending by the way. Bryan comes out to do more of the same, but he does it in a much less canned way and is followed by Punk turning the YES chant into another bit and giving Jerry Lawler a reason to have a live mic laying on his table. Oh yeah, Jericho came out too to run through all of his catchphrases (yes, all of them) in what was easily the best part of this open. Big Show and Kane came out as well, leading to a big fat ruckus of a preview for the Money in the Bank match. Kane clearly seems to be a face now, taking Jericho on by himself, and saving Cena from a choke slam by going after Show. Show of course cleaned house to prove he is the dominant figure in this whole thing, which means to me that he’s definitely going to lose.

Coming back from break it was again reiterated that Charlie Sheen will be acting as social media ambassador, and now I actually know what that means. He’s going to live tweet Raw. Welcome to the club buddy. He may not even appear on the show. First match is an 8 man tag putting Truth, Kofi, Christian and Santino against Young, O’neal, Rhodes and Otunga (who somehow still has a place in WWE post Laurinaitis). For some reason AW is mic’d, so the whole arena gets to pull The Prime Time Players from the match because they took a couple bumps. Rhodes leaves too, leaving Otunga all alone against the four faces and Brodus Clay. Clay punks Otunga into taking a Cobra shot, match over. In true anti-bullying fashion, all the faces decide to get their finisher in after the match on Otunga, who I guess is taking the post Laurinaitis punishment now (so THAT’S why he’s there!)

Backstage Teddy let’s Del Rio know that he will face Sheamus for the Heavyweight (not as important as the WWE) Championship at Money in the Bank. Alberto is also informed that he has a match next against a surprise opponent. Normally that surprise would either be Sheamus or Tensai, but since he’s already facing Sheamus in 2 weeks and Tensai is a heel, I’m actually not sure who he’ll face. Turns out it’s, Sin Cara? Whatever. Del Rio bum rushes Sin Cara and beats the crap out of him before they even got his lighting going. Finishes with the armbreaker outside the ring, injuring him before the match ever started. Take that Teddy Long!

Backstage Bryan is trying to get on AJ’s good side leading up to the MITB match, and she is totally playing it off as if she is planning on screwing Bryan over. I really think she’s going to double cross punk and win the title for Bryan. That way they can have that I quit match I keep hoping for at Summerslam. If Punk beats him for a third straight time in a PPV there is no reason for another one. I’d be really surprised if it didn’t turn out this way.

Paul Heyman in the WWE Connecticut studio to announce that Brock Lesnar will make his announcement regarding Triple H’s challenge at the 1000th episode of Raw in three weeks. Heyman goes into hype mode and once again kills it. He’s so good that it’s sad the actual match won’t be able to live up to his hype. Also Kane and Big Show will have a no DQ match later. Ya know, because they hit each other an hour ago.

Ziggler and Vicki (still with him after slapping him on Smackdown) against AJ and Sheamus. Can we fit another guy in the #AJALL storyline? What a hoski. So this is how we promote a World Heavyweight Championship match? Del Rio has a non match and Sheamus gets a bit part in the AJ storyline? Just get rid of the belt and be done with it. So Sheamus basically smacked around Ziggler with a bunch of “white” themed moves but Ziggler tagged Vicki just before he could get hit with a Brogue kick. Sheamus got him anyway and AJ made short work of Vicki for the win. AJ went back to celebrate with Punk, but of course he was busy talking on the phone with his sister so he missed the whole match. Now Punk is on AJ’s bad side. UH OHHHHHHHH.

Oh man, Heath Slater is going to bet beat up by Doink this week! It looks like he’s wearing the same wig that he had 15 years ago. No Dink by the way. Doink didn’t even bother taking off his clown jacket before…Heath Slater won? Not so fast, Diamond Dallas Page, who I kept hearing was in the house, came back as well to promote some yoga and drop a Diamond Cutter on Slater.

Time for Kane versus Show. I keep looking at these guys and imagine how the crappy wood ladders they use will probably break under the weight of either of them. I’ve got to think it will be Jericho winning this match, with him then cashing in right after Punk reclaims the title at Summerslam (just like last year and yes I don’t think WWE is creative enough to not do that). I just can’t imagine Cena running in after a match and picking up a cheap win. Aside from Show landing a superkick on Kane’s jaw, the match is exactly what you think it would be. Big Show spears a chair holding Kane, injuring his own shoulder in the process. Show hits a choke slam down onto the chair for the win, but Show sold the shoulder injury after the match so that could play our somehow. Hard to climb a ladder with one arm.

Eve is back! Meh.

Tensai versus Kidd next. I’ll take this opportunity to mention that the Smackdown ladder match at MITB looks like the most boring thing I’ve ever seen. In the time it took me to type that one sentence, Kidd stole a victory with a quick roll up pin and got the hell out of there. It looks like they want him to get the underdog buzz that Santino had during Elimination Chamber. Tensai of course beat up his manager guy. Backstage, Jericho and Bryan are the new Laurel and Hardy of wrestling. Cena and Punk are the new Don Imus and Howard Stern. Punk wants Cena to just follow his lead. Cena agrees like a little bitch. No way in hell they are winning tonight. Pissed off Tensai got some revenge on Kidd in the locker room too. I wonder if Josh Matthews ever conducted an incident free interview?

Main event time. All parties involved get to do there thing. Jericho definitely has some extra charisma in the ring since he came back. It’s good that he’s bringing back all of his old cliches from back in the day. He has too many to not use any of them. Like any tag match involving Punk these days, CM spends most of the match outside the ring. That means that in a tag match consisting of three of the best talents on the roster, two of them are not in the ring most of the match because Cena has to be out there instead. I’ve seen this match a million times before, as Cena gets knocked down any time he starts building momentum, only to finally get to Punk who runs through his entire array of moves.

Jericho and Cena take things outside leaving Punk and Bryan (the legal men) in the ring. If you’re thinking that this is the perfect time for AJ you’re right. Just after a Punk superplex evens the field AJ comes skipping in only neither Punk or Bryan acknowledge her. AJ decides to take out a table threatens to jump off the top rope before Bryan and Punk both notice and talk her down. AJ then kisses Punk, and pushes him off the ring, onto Bryan into the table. Consider AJ an impartial, crazy referee.