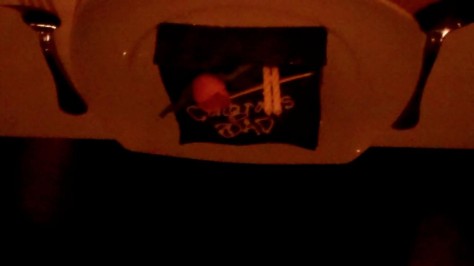 On November 5th 2012, my wife gave birth to our first child. During the pregnancy Idecided that I would write about the experience. Every week since I have documented all of the events that took place throughout this time, along with my thoughts on them. Now that I can confirm that our baby is happy and healthy, I will share those thoughts with you.

It was Friday March 1st. I was on a cruise with my wife Jessica celebrating our first anniversary. Our actual anniversary is on February 23rd, but she wasn’t feeling well that day due to seasickness (or so I thought) so we had our big dinner on another night. While we were waiting for our food Jess went to the ladies room, which was odd considering she usually hates public restrooms but I didn’t think much of it. She had been having issues for most of the trip. After dinner we ask for the dessert menu. Instead we each get a chocolate cake. On it is a “Happy Anniversary” sign. I look at Jess and she has the video camera in her hand. “That must be why she went to the bathroom” I thought. I look back down and below the sign the cake says “Congrats Dad.” The rest of my thoughts were as follows:

Looks back at Jess. Filming me while smiling.
-Wait a minute. Is she…?
Jess nods, knowing what I’m thinking
-I’m going to be a dad?

After it finally hit me I heard all the noise around me and realized that the entire restaurant staff was around us, to congratulate us on not only our first anniversary, but also (gulp) finding out that we are pregnant. The look on my face prompts the maitre d’ to get me a glass of scotch straight up, and that is how I found out my wife and I were pregnant.

To be fair, we had agree to start trying just a couple of weeks earlier so it wasn’t total shock. However for it to happen so quickly was. It only took one try (wham, bam, thank you  m’am according to Jess’ Grandmother). The idea of that had us both wondering how we hadn’t had a slip up after being together for 7 years beforehand. We had talked about it quite extensively since before we even got married. How we would raise a child, what we would name it (don’t know if it’s a him or her yet), how quick would we want to throw the kid at our parents so we can go on vacation. Nothing prepares you for hearing the words “I’m pregnant” for the first time though. It’s even stranger to say it yourself. “We’re having a baby.” Still not used to that.

There was one other surprise to come at me during that trip. ***WOMAN ISSUES ALERT*** The whole nine month thing doesn’t start at conception. It starts at the end of the woman’s last cycle (if you get my drift). We’re not 2 weeks into pregnancy. We’re one month! Only eight more to go and I just found out! This is happening way too fast! Exclamation Marks!!!!