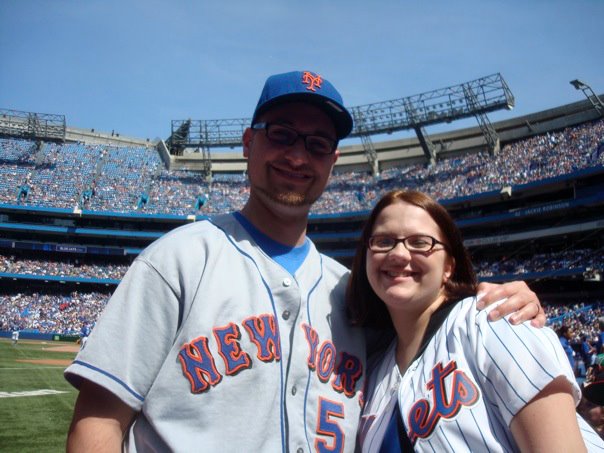 On November 5th 2012, my wife gave birth to our first child. During the pregnancy I decided that I would write about the experience. Every week since I have documented all of the events that took place throughout this time, along with my thoughts on them. Now that I can confirm that our baby is happy and healthy, I will share those thoughts with you.

Week 14 – A Grateful Trip to Canada

The craving of the moment is buffalo wings. Jess’ nausea is subsiding (being replaced mostly by cramps) and she has gone from gaining a little weight to getting into shape (if you know what I mean). What better time to go on a 9 hour road trip to Toronto!

I had been cautiously planning this trip for a few months now. The Mets are playing the Blue Jays and since I’m all about going to different ballparks and she loves to travel, it makes total sense to go. However there is no guaranteeing how Jess will feel in a given week. So while I took the time off and knew what hotel I wanted to stay at and all the other details, I couldn’t book anything until the last minute just in case she took a physical turn for the worse. Thankfully she was feeling mostly good all week so we were good to go.

For me this was a little more than just another road trip to a ballpark. I know that once the kid shows up trips like this won’t be coming around as often. Also since she is on the verge of going from pregnant to PREGNANT, this could also be the last time we can do anything remotely like this for a while. In my head, this is a bit of a last hurrah as a “young” married couple before we become parents.

To Jess’ credit she handled the drive like an absolute champ. We left a little later than I wanted but she never had me stop for a bathroom break, something which shocked me based on recent events. I handled all the driving and she handled all the keeping me occupied. Total blast. Everything our road trips have always been about. I could tell that Jess wanted to treat this trip as almost a ‘thank you’ for me doing so much for her over the last three months. We did literally everything I wanted to do. Staying at the hotel in the ballpark (a treat I must say) even though it is more expensive, squeezing in the Hockey Hall of Fame (which she could have cared less about), making sure she got up to have breakfast with me (not an easy feat). She really went the extra mile. It wasn’t that she didn’t enjoy herself, but she definitely pushed herself for my benefit. I was willing to work around things to make the trip easier on her. She wouldn’t have any of it.

On the way home we talked about how this trip really was about everything I wanted to do, and I mentioned that the only other thing I could have done this weekend was watch the WWE Pay Per View event, which was happening that night as we were driving. I wasn’t disappointed that I was missing it. I had certainly done enough guy stuff over the course of the weekend and I could always watch on online later if I wanted. Anyway not much later after that conversation Jessica’s wing craving snapped back into gear. She was dead set on having buffalo wings in Buffalo, however the nearest place was 40 minutes out of the way so it was not to be. I suggested that with Rochester coming up she should look for a place there. Eager for chicken goodness, she finds a Buffalo Wild Wings five miles away. They have to have wings! Let’s go! Jess was on the fence about whether or not her stomach could actually handle wings at this point, but the craving was too strong and we had to at least check it out. Since we had a long drive ahead of us (about 6 hours left), we decided that if there was a long wait we would just go to the Denny’s across the street. We head over and right away we notice that it looks uncommonly crowded for a Sunday night. Seconds after walking through the door we see exactly why. The Pay Per View was on all the TV’s and the place was filled with wrestling fans.

I can’t explain how much Jess hates wrestling. Of all my dumb hobbies, she finds this to be the dumbest, and of all the dumb luck she happens to pick the one place that is showing the one thing I thought I wouldn’t get to watch this weekend. Her face was priceless. The next question was how long it would take to get a table. The answer? Right away. She could have put up a stink about it and based on the previous 48 hours of “me time” I would have absolutely gone somewhere else had she really wanted to. However this wonderful pregnant woman of mine grit her teeth, ordered her wings, and watched the second half of the show with me in the presence of Rochester’s finest wrestling fans, most of which definitely thought it was real.

She’s done a lot of great things for me over the years, but this weekend tops them all.