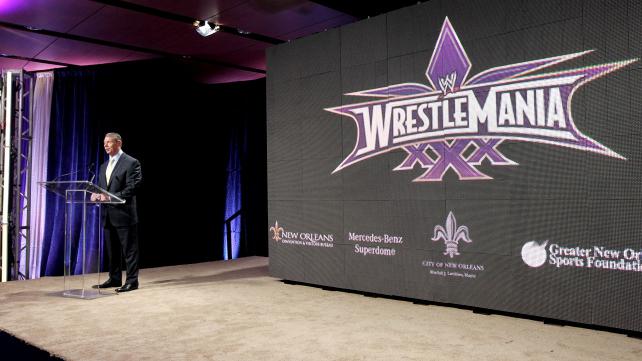 12:06 – Montage of the WWE selling the press on how successful it is among different formats and demographics. Pretty much everything you see on Raw each week but with more numbers and real celebrities thrown in. The audio didn’t work for the first minute, which was okay because the full video took forever. A guy also walked right in the way of the screen.

12:10 – Out comes Brodus Clay, with dancers and music. Very funny watching him do his full schtick in a room with no kids and hardly any applause. Sadly, he did not rip off his pants. Afterwords he walked away, never to be seen again.

12:12 – John Saboor, the Senior VP of special events introduces the mayor of New Orleans, Mitch Landrieu who is has “I got a feeling” by the Black Eyed Peas for entrance music. He talks about how they have Mardi Gras, the Super Bowl, the 2013 NBA All-Star game (among other events like the Women’s NCAA Final Four) before officially announcing that the Superdome will host WrestleMania 30 on Sunday April 6th, 2014. Cue the debut of the logo and a short section of “I got a feeling.”

12:15 – Landrieu states that WrestleMania produces $100 million in profits before bringing out Vince McMahon, who comes out to his own music. It’s believable that a man of his stature in this situation has his own music. He talks more about the product and how the city of New Orleans is perfect for ‘Mania.

12:19 – Saboor kisses Vince’s ass before bringing out the owner of the New Orleans Saints,  Rita Benson Leblanc (she comes out to Neyo I think) who says that she was dancing with McMahon when the music played. That’s what we’re dealing with here.

12:22 – R-Truth comes out and sings his intro music. I never really got to hear the lyrics until now. That’s because there is no cheering. The song is really stupid. He then walks away, never to be seen again.

12:24 – Saboor calls out the GM of the arena, Allan Freeman. He brings up how the past ‘Mania sites have been football stadiums that all sold out the show. He said the initial proposal he made to WWE was in 2009. It wasn’t until 2011 that they went to Connecticut to make a pitch. McMahon was pretty much sold from there.

12:29 – Saboor goes into the WrestleMania week before introducing Stephanie McMahon. She mentions how Drew Brees tweeting about ‘Mania on Friday brought back 9.5 millions clicks. She then talks about the WWE’s presence in the community during WrestleMania week, finishing off with what’s likely the slogan for the even, “30 years in the making.”

12:33 – President of the New Orleans Convention Bureau Steven Perry out next to try to figure out what the hell he just let into his city. He reiterates how New Orleans puts the same energy and excitement that the WWE brings into everything they do.

12:36 – Saboor calls out the Rock, saying he’ll face Cena at MetLife Stadium, and of course mentions his movies as well. He talks a bout his roots in New Orleans and again brings up GI Joe which apparently had scenes shot there or something, as well as playing in the National Championship Game with Miami. He adds how special WrestleMania is for the city, fans and performers. He starts a sing-a-long to “When the Saints Go Marching In” before taking off.

12:42 – Saboor announces John Cena, the final guest. How does he still get top billing? He mentions how humble Vince McMahon can be and how the Superdome is the perfect place to celebrate WrestleMania’s 30th birthday, specifically for how the building helped the city rally back after Hurricane Katrina. He talks up the special nature of WrestleMania and how they will provide a celebration worthy of the city. He finishes and Rock’s music hits. The two of them have a cheery chat before shaking hands and posing for pictures. Out comes Big Show, Mark Henry, Alberto Del Rio, Layla, Khali (man India must really add revenue) to pose for more photos and the press conference is over.

I was a little surprised that the announcement wasn’t delayed at all coming off the Superbowl blackout. I thought that would at least raise a few eyebrows with the WWE but I guess they got all the answers they needed. Considering they were in New Orleans for last night’s Elimination Chamber (which was never referred to by name) and WrestleMania 29 is right around the corner, there was never going to be a better time to announce it than now. It’s a big party city and it definitely fits an event like this one.