I’m lucky enough to be attending WrestleMania this year which means
two things. 1) I’m better than you; and 2) I can’t do my normal style of review since I won’t be watching on TV (I’ll let you decide if that’s good or bad).

So in place of a regular recap I’ll be giving my thoughts on wrestling’s biggest show live from my seat. It won’t have as much detail but at least it won’t be as long either!

Right off the bat I can tell I’m in for a long night. The pre show is extended to an hour starting at 6:00pm and it won’t end until 11:00pm. That’s five hours of wrasslin’ wrapped around a couple of hours traveling to and from the arena. I’m not sure I’m still going to like wrestling by the end of the night. I have the whole card divided into three categories (along with my stone cold lock predictions):

Matches That Could Excede Expectations
-Chris Jericho vs. Fandango (Jericho wins in what has potential to steal the show)
-Ryback vs. Mark Henry (Ryback wins in what could also be the bomb of the night)
-Alberto Del Rio vs, Jack Swagger (Del Rio wins in a match I only care about because I think Ziggler will cash in and take the World Heavyweight Championship at the end)
Randy Orton, Sheamus and Big Show vs. The Shield (Shield wins on an Orton heel turn)

Matches I Am Paying To See
-Ziggler and Big E Langston vs. Team Hell No (With two of my favorite guys involved, Team Hell No wins but possibly break up at the end of it all no thanks to AJ)
-Undertaker vs CM Punk (The spectacle of the night and real main event will see the streak continue as Punk takes a beating that allows him to take a break)

Matches I’d Pay NOT To See
-Tons Of Funk And the Funkadactyles vs. Team Rhodes Scholars and the Bella Twins (Faces win in a match that Damien Sandow can’t even save)
-Wade Barrett vs. The Miz (Miz wins and I’ll be on the beer line)

Enough previewing. On to the show!

6:04 Kofi starting the pre show in a suit with JR and Dusty Rhodes. Big step down for Kingston 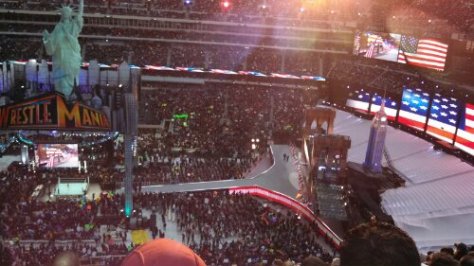 707 shield and team super faces lead things off
721 shield wins because of Orton but not how I planned it. Orton took tag away from show so when shield ganged up on Randy Show didn’t help. Afterwards he KO punched Sheamus and Orton before storming off. Really fun match. Seth Rollins stood out.
730 Mark Henry versus Ryback next. Over/under on rape attempts is 2.5. Good pop for Ryback and our first pyro entrance!
737 boring chants from the crowd. They’re not wrong. Really slow and not interesting.
739 mark henry wins because ryback fell forward going for shell shocked. Hood finish to a bad match. Henry went back to do more damage but Ryback got up and hit shell shock for real this time. Ryback then went the wrong way out of the arena and had to be escorted back down the ramp and out the side. Classic Ryback.
750 ten seconds in, Ziggler and Big E is already better than Ryback/Henry. Dolph almost lost after AJ kissed him and Bryan hit a roundhouse kick. Kane would chokeslam Dolph and Bryan hit a flying headbutt to win a very good match.
757 Fan-dan-go! 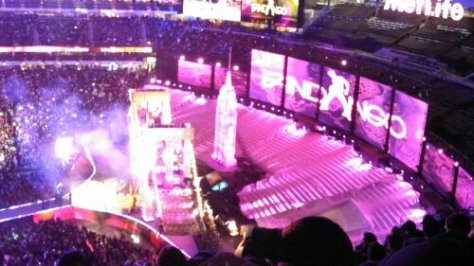 812 Fandango wins by rolling the walls of Jericho into a small package. Jericho dominated most of the match and looked really good. Fandango had a couple nice moves but wasn’t overwhelming.
820 P Diddy medley time. Crowd I’d into it
830 Swagger came down the ramp in a 4 wheeler during the match montage and we got hate speech instead of a regular entrance. No car for Del Rio but he did get some pyro and a swanky white robe.
840 crowd chanting for Ziggler to cash in throughout the match
845 del Rio wins a decent match on the arm breaker. No Ziggler and the crowd boos heavily when they move to the next segment. Tonight’s not the night.
850 Punk vs Undertaker next and the crowd is pumped.
900 Punk’s entrance with Living Color was great, but there really is nothing like an Undertaker entrance. Unreal vibe.

902 match wastes no time telling its story and feeling huge. Crowd is totally split and very loud
905 Punk did old school on the Undertaker! Move of the night
915 Punk just can’t break a table. Flying elbow still brought “awesome” chants
918 Punk hits gts but taker immediately responds with tombstone but only gets 2!
925 Undertaker wins with an unbelievable finish. Reversals of finishers left and right, Punk hit taker with the urn but Undertaker kept the streak alive with a tombstone. Match of the year. Punk was amazing and the Undertaker is no slouch himself. This was worth the price of admission.
932 I don’t envy Triple H and Brock Lesnar having to follow that classic. Paul Hetman gets kudos for being out for back to back main events though.
935 Shawn Michaels officials gets introduced as Mr WrestleMania. That’s equal to Joe DiMaggio being announced ad the greatest living hitter right?
938 Big pyro for Lesnar. Big set piece for Triple H. He’s like Skullator.
950 Brutal match, but anything outside the ring is totally lost with the crowd with the exception of Triple H being put through a table.
953 Lesnar botches a pedigree but Triple H recovers and hits it. Damn part timers.
955 you can hear chair shots from up here.
1003 Just had dueling kimora locks for what felt like forever. Lesnar kept
teasing tapping out but then kept slamming Triple H into the steel steps.
1005 Triple H wins! He clocks Lesnar with a sledgehammer and pedigrees him into the steps to win it. Match definitely had its moments but was only okay overall.
1015 Looks like the Rhodes Scholars got the shaft because Cena/Rock is next. They wasted no time on entrances either. Getting right to it.
1026 A guy just left his seat and headed home. No one gave him a hard time about it. Crowd is kinda gassed and match doesn’t have the tempo to bring them back. Crowd is 80% Rock but yhru are reacting like its split.
1040 I called the spot but it didn’t finish. Rock went for a five knuckle shuffle but Cena landed an AA for a two count.
1043 Spot of the night! Cena faked going for a peoples elbow and held the ropes when Rock got up. Rock hit a Rock bottom anyway for two.
1045 both guys won’t stop trying finishers and Cena finally hits an AA to win it. They hug and even though Cena wins the Rock leaves last. Rock holds Cena’s arm up at the stage and fireworks close the show. Everyone leaves feeling meh.

Overall it was a very good show. The weakest match was Ryback/Henry, and Cena/Rock suffered from the crowd being too drained to care and the hate for Cena. Still glad I can check WrestleMania off my bucket list and I’ll never forget Punk/ Undertaker. We’ll see how they follow it up tomorrow on Raw.

Until then I’ll leave you with the last image I saw. 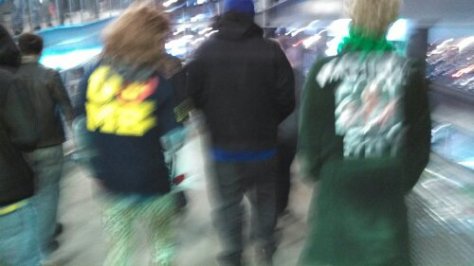