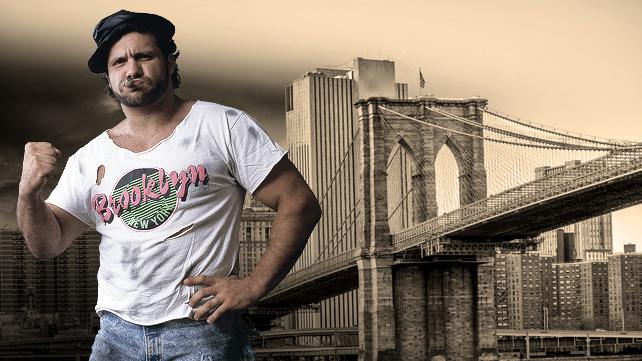 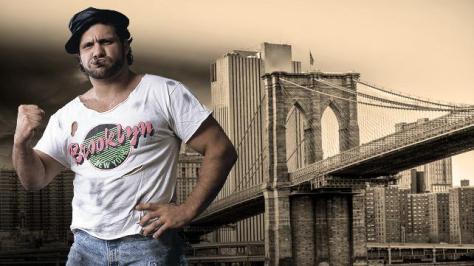 The last time Raw was in my neck of the woods it was the night after WrestleMania. I had the chance to get tickets and passed since I was going to ‘Mania and didn’t think it would be as good. Man was I wrong. I ended up passing on one of the most memorable editions of Raw ever, with a crowd that is still making an impact today.

So now Raw is in Brooklyn, the night after a PPV (and a pretty good one in MITB), and I am not making the same mistake twice. I’ll be at the Barclays Center for RVD’s return to free TV, Punk’s reaction to being stabbed in the back by Paul E Dangerously, and Dolph Ziggler’s romantic squabbles with AJ Lee. I’m also expecting the Brooklyn Brawler to show up because it’s the place he’s named after for crying out loud.

Along with live Raw updates I’ll also throw in whatever I catch before and after the show is on the air, so BEWARE OF SPOILERS FOR SUPERSTARS (if you are really going to watch Superstars and care about spoilers).

733 big boom makes everyone wet their pants. Still trying to get in (apparently the boom was tons of funks entrance) 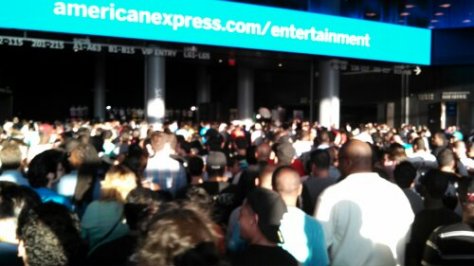 745 ryback beat the brawler in record time on superstars. So that’s that.

753 over in mediocreland, Miz beat Slater with a figure four. He’s the Miz, and he…is…average.

Ziggler gets a rematch! I’m in!
802 Cena spoils the party. Makes some chatter and Bryan let’s him pick his Summerslam opponent. (We all know it’ll be Bryan).
807 Orton out with the briefcase to talk trash. He’ll take his time to cash in… 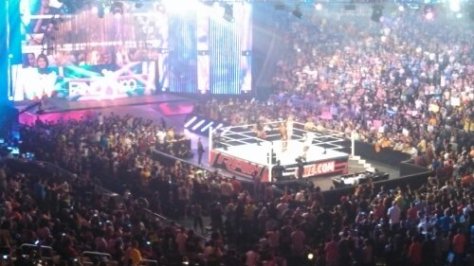 809 but here comes Fandango! He makes Cena say his name and cuts Orton off. Randy doesn’t like that and we have our first match.

819 Back and forth affair. More offense from ‘Dango then I expected. Crowd is trying very hard to be outrageous. Not quite there yet.

828 A bloody handed Orton hits a superplex while the crowd does the wave, and wins with an RKO. Good match.

835 A suited up Mark Henry gave Cena credit for beating him and makes his case for Cena to pick him for Summerslam.
838 The Shield interrupts and surrounds the ring and brings him down (despite a good fight) with a triple powerbomb. I thought Henry was going to go through the ring. Nice pop. 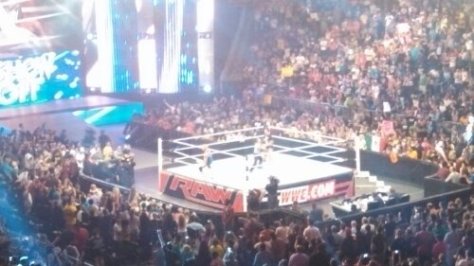 850 Ziggler and Del Rio now? We’re not even in the second hour. Damn good match but what did you expect?

902 Ziggler hits a fameasser off the top rope, but AJ comes out and rings the bell to distract him before he can cover. Del Rio blind sides Dolph with a kick to the head to win, and AJ runs in to slap the bejesus out of Ziggler until Big E dropped him with a Big Ending. Great match and well done finish. 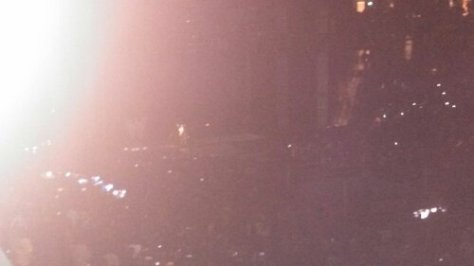 915 Bray cuts a promo about us being lied to, and that he’s the answer. Truth then comes in with a chair. Bray is left alone in the ring, begging Truth to attack. Instead, Bray psyches him out and attacks, with the other two Wyatt’s adding to the damage. Bray kisses Truth on the head and finishes him off. Crowd loved it and so did I.

924 The Real Americans come out, but somehow don’t use “I am a real American” as entrance music. Zeb wants Cens to choose one of his guys. The fans voted for the Usos to face them.
930 Usos sneak a win with a roll up in a bathroom break match.

937 Damien Sandow one on one against Christian. Sandow has an extra pep in his step as the crowd chants “you screwed Cody” 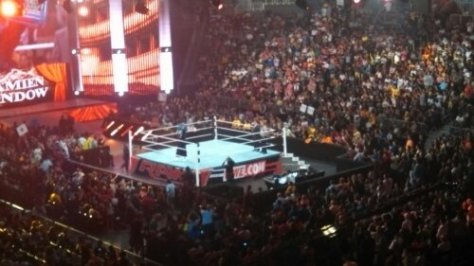 941 Christan escapes the elbow of disdain to roll up Sandow and get the surprise win. Rhodes then runs out and beats up on Damien, forcing him out. Big pop for Cody.

942 They keep calling Cena’s decision just “The Decision.” I wonder who he’ll bring his talents to.

954 The non-injured Bella (Brie) takes on Naomi, who can actually wrestle. Naomi looked decent in victory and got more ring time than the Usos and Real Americans. No justice.

1000 Hour three starts with CM Punk calling out Lesnar and Heyman. Only Paul comes out though, and he says Punk doesn’t exist to him anymore. He says he made CM Punk, and turned on him because of how he abandoned him after ‘Mania. Ultimately, he screwed Punk because he “can’t beat Brock Lesnar.” Punk responds by saying he swears on Heyman’s children that he’ll get him and anyone associated to him. Epic promos by both.
1015 After some more jabber, Bock Lesnar comes out and brawls with Punk outside the ring. After some back and forth, Lesnar F-5s Punk onto the announce table. It doesn’t break because Punk has the worst luck with tables.

1030 Time for RVD versus Y2J and I’m damn pumped for it. Big pop for Van Dam of course

1044 Excellent match. Everything you’d expect from both.
1054 RVD wins a hell of a match on a frog splash and that was worth the price if admission alone.

1108 Cena milks it for ages but finally does pick Daniel Bryan and the crowd goes nuts to close the show.

1120 Cena put Ryback through a table to win the dark match and we’re out.

Overall a very good show and the commercial breaks didn’t kill me like I feared they would. Now I’m just jacked up for Bryan/Cena and Punk/Lesnar at Summerslam.

One thought on “Raw Live Results And Reactions From Brooklyn”